Mark Vz (3″-150mm Substrates) – The MARK Vz features a two tier hot plate system that reduces overall system footprint compared with competitive systems of its class. It is ideal for all substrates, including GaAs and other fragile materials and offers random path capabilities to streamline wafer flow and performance.

88e Series (100-200mm Substrates) – The 88e is a 200mm capable processing tool based on the very successful 88 Series systems. However, we didn’t just “scale-up” the modules, we redesigned the heat/chill stations and the spin stations for optimal processing of the larger substrates. The 88e is targeted for those fabs that need 200mm process capability, but don’t have the budget for the higher priced alternatives. In addition, if your fab is using other 8X equipment, the transition to the 88e is painless.

88 Series (3″-150mm Substrates) – If you need in-line processing with robotic handling, the 88 Series is the system for you. The 88 Series has all the features of the 86 Series with some improvements available only for robotic systems. Rite Track has added exclusive enhancements specifically for fragile substrate processing. Rite Track is the exclusive product owner of the SVG 88 series product line (acquired in 2003) including the SVG 88 Coater, SVG 88 Developer, and SVG 88 Scrubber. (2003 press release)

86 Series (1.5″square ,2″-150mm round Substrates) – – The time-proven workhorse of the semiconductor manufacturing industry, the 86 Series track systems are seeing new life in the MEMS, thin film head, and solar cell industries. Rite Track has upgraded the 86 series to sub micron processing capability with the addition of optional features. The 86 series offers one of the most reliable and highest throughput systems in its class. The 86 series is one of the few track systems on the market that can handle square and rectangular substrates. Rite Track is the exclusive product owner of the SVG 86 series product line (acquired in 2003) including the SVG 86 Coater, SVG 86 Developer, and SVG 86 Scrubber. (2003 press release)

European Market Partner was founded in 1991. European Market Partner is a full-service distributor of tools and parts used in semiconductor fabrication. Dedication towards our customers and flexibility in finding the right solution, combined with application knowledge and fast supply logistics are the keywords of our service. 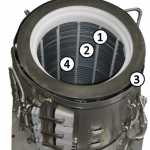